“The emperor marched … and all who saw him exclaimed: “Indeed, the emperor’s new suit is incomparable!” Nobody wished to let others know he saw nothing, for then he would have been unfit for his office, or too stupid.” - Hans Christian Andersen, 1837


It could cost as much as 50 billion dollars.  It has been touted as the path to commercially viable fusion power.  Its name is ITER – a super massive tokamak under construction in the south of France – and ITER has problems.


Dr. Robert Hirsch has something to tell the world about this project.  Robert would be the man to know.  Dr. Hirsch has worked in energy for the past 50 years.  In the seventies, he served as director of fusion research at the Atomic Energy Commission [1].  With scores of employees and hundreds of millions of dollars, Hirsch drove all US fusion research for a time [3].  He had high hopes for Tokamaks - but lately, he has had second thoughts.  Hirsch has arrived at conclusion we all need to reach: an ITER based power plant will not work commercially.


Dr. Hirsch crystallized his thoughts in Fusion Research: Time to Set a New Path [2].  The article is an eye opener - you should read it.  I came away thinking: how are we still funding ITER, when it has so many obvious flaws?  How are we still treating ITER like “the way” to commercial power, when it will clearly never get there?  Why will nobody stand up and tell the ITER community that this will never be commercial; and how are taxpayers not furious over this?  It feels like the old story of the emperors’ new clothes; every expert has deluded themselves into thinking this will be commercial – while any simpleton can see huge flaws. 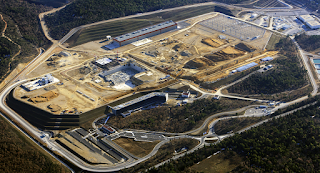 Whenever the power industry looks at fusion, they see it as an “add on” to the nuclear industry.  We have fifty years of experience working in nuclear fission.  Any fusion industry would naturally grow out of this knowledge base.  That was the prospective taken when the Electric Power Research Institute looked into fusion in 1994.  A panel was assembled to define what was needed to make fusion commercial [5].  The recommendations may seem obvious: fusion needs to be practical, cost-effect, safe and regulatory friendly.  Ideally, ITER needs to be heading in that direction.  If not – then the world should redefine ITER as a scientific experiment and consider other paths to commercial power.  But alas - It isn’t.  The world is spending tons of resources on ITER; while starving other fusion concepts. It is failing to do so at a time when more than ever, we need a broader approach; more than ever, we need fusion power to stop climate change.

In reality, things could not be going any worse for ITER.  Every year, its’ budget, bureaucracy, complexity and lead time rises.  Unfortunately, the fusion community seems completely blind to these flaws; they just repeat the mantra that ITER will be made commercial.  A growing list of critics are not buying it.  Below are the highlights from Hirsch and other peoples criticisms.


1.    ITER is too big.  According to an analysis by Livermore, the core of an ITER based power plant would be 60 times more massive than a conventional fission core [2].  That is just the core.  The plant would also need a vacuum, cryogenic, handling and environmental recovery system.

2.    ITER is too complex.  The machine has roughly one million parts.  When finished it will be made from 23,000 tons of steel [6].  This structure will “breath” as it expands and contracts under cryogenic and heating loads.  Imagine the cost of doing maintenance and repair on such a machine.

3.    ITER is too expensive.  We cannot know what the machine really costs; each nation is under no obligation to tell us how much they spent.  Estimates run from 16, 21 or even 50 billion dollars [6, 10-12].  Realize: any power plant may well cost more than this.

4.    ITER will not be finished in time.  Since the start, ITER has been synonymous with delays.  For example, it took about three years to decide where to build it [7].  Originally, ITER was supposed start working next year [8]. Fat chance - the current target is at least seven years delayed [9].

5.    ITER is not safe.  ITER creates two wholly new safety issues: plasma disruptions and quenching.  If disruptions accidentally happen, it would be expensive and dangerous [2].  The heat in a disrupted plasma can be ten times higher than the melting point of the first wall and the divertor [2].  Imagine the problems that creates for regulators, managers and workers.  The second problem is quenching.  This is when a superconducting magnet suddenly becomes a normal electromagnet – and releases its energy.  ITER’s coils contain the same energy as 10 tons of TNT.  This has already happened 17 times in tokamaks [2].  This causes overheating and melting of components; it may even start dangerous fires.

6.    ITER needs new technologies.  Work at the University of Wisconsin has indicated that no solid material can reasonably handle ITER’s steady state [2].  The hot helium produced buries itself in the metal walls causing blistering.

Clearly ITER itself will never be commercial.  Supporters will argue: “So what? ITER is a government experiment - not a commercial product - the next machine will work.”  There are several evils in this logic.  First, if you admit that ITER is not on the commercial path then stop treating it like it is.  Fund this experiment appropriate along with other options; but do not risk everything on ITER.  That is a path we already know will not be commercial.  Secondly, delaying action pushes the world further along without a fusion option.

Supporters have argued that ITER will work, and it will lead to DEMO.  This is supposed to be a demonstration fusion power plant.  Today, no one can be certain what DEMO will look like, cost or how it will work.  Supporters and critics alike, have been forced to make projections.  We do know that any US plant will be regulated by the Nuclear Regulatory Commission [2].  At present, it can take between five and six years to get approval from them to build [13, 14].  On top of this, the NRC may take years to first approve a plant design.  Wow.  An approved design will likely require a gas-tight building, an expensive contamination building and safeguards against plane crashes, earthquakes and tidal waves.  All these add-ons cost more money.  Simplifying the NRC hurdles means having a design that is simpler than a fission one.  That may be possible – but DEMO will probably not be the machine to do it.

Once approved, energy companies will need to find a way to make fusion profitable.  That means making fusion costs comparable to other energy approaches.  Economists have a term to work out energy costs: a levelized cost of energy [17, 18].  When you calculate a LCOE, you are putting everything into the final number.  Every cost is included: building the power plant, financing it, buying the fuel, paying workers and even covering the repairs.  Several approaches to energy generation are compared in this way below [19].  These are the average costs provided in the 2013 US Annual Energy Outlook report. 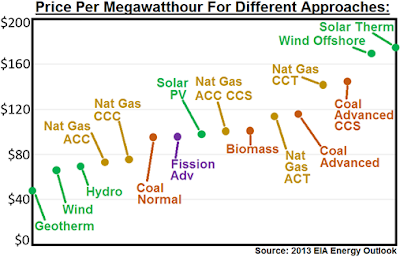 Geothermal is surprisingly cheap.  Unfortunately this is not true everywhere in the country.  Still, this is one reason why environmental advocates like Al Gore have pushed it so much [16].  Below, I estimated the LCOE for DEMO based on numbers from ITER [18].  My model is very rough; but my number shows that DEMO will be likely be priced out of the market.  It will not be commercially viable. 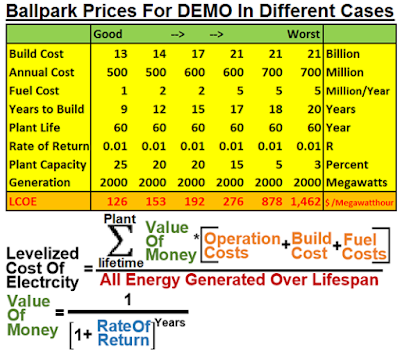 It is clear that for commercial fusion to work, any power plant will need to be simpler and cheaper than ITER.  Fortunately, there are many different ways to do fusion.  One example is a fusor, which can fuse the atom for thousands of dollars and for thousands of hours continuously.  They can be built by non-specialists and worked on by solo hobbyists.  A recent paper from the journal The Physics Of Plasmas even argued that you could get net power from a magnetically shielded fusor [21].  If I were in charge of fusion funding, I would sit up and take notice.