If you look at the numbers – in 21 years, many countries will run out of oil and gas [2, 3, 8].  Energy will look like a poker game.  Most international players will be knocked out.  The remaining nations will hold all the chips.  The imbalance in oil and gas will have a big impact.  About eighty percent of the worlds’ energy comes from fossil fuels [9].  What are we going to do?  Bill Mckibbens has argued that we will start a world war over this [11]. No one can predict the future.  But mankind is facing a major energy shortfall.  21 years is not far off.  You reading this; you could be alive then.

Everyone has got an energy plan.  We have seen waves of speakers at TED tout their new ideas.  Al Gore and his supports have argued that we can fill the gap with renewables; notably geothermal [10].  We will probably need all of these plans.  Different solutions are needed in different places.  But, everything needs time to develop.  We have to get started now.

But, we are not doing it.  Ignore the green talk. Use of fossil fuels has been rising worldwide [12].  The reason is money.  If you do not think money runs the world: ask someone with a job.  Fossil fuels are dirt cheap.  They have been since the dawn of the industrial revolution, 250 years ago.  In all that time, through many governments, markets and ideologies - we have burned it.  We still burn it.  Our world is wired for fossil fuels.  It is going to take strong forces, as well as time to wrench us away.

These forces could be environmental, political or economic.  An environmental force is when we break the planet, to a point where it becomes unlivable.  I hope this never happens.  We cannot let that happen - but we have already done so much damage.  A political force is when people everywhere decide to ignore the economics and act on Earths’ behalf. Thomas Friedman has pushed for this [1].  I do think it will be fast enough, absolute enough, or permanent enough.  There is not much time.  Political will may work in some countries, but not everywhere.  It may work eventually, but not soon enough.  It may work for periods, but not forever.  This is all due to dirt cheap fossil fuels.  The last option is economic.  We find new sources of energy, and their prices are so low - that it pulls in the entire world.  These must make zero greenhouse gases.  They must scale-up to have an impact. Finally, we need to be able to jockey them into our infrastructure.

The field of possibilities is vast.  We can redesign almost everything around energy conservation.  This includes transportation, cities and farming.  There exists as many choices for energy generation.  There is a set of options that Bill Gates has called: energy farming [13].  These are renewables.  They are green, but they lack the energy density, or scale of fossil fuels.  There is a myriad of fission options.  But these are expensive, complex and less safe.  Many options simply mitigate burning carbon: burn less, pollute less or find new sources.  Finally, there is our way of life.  We can, we should, and we must be gentler to the Earth.  It is the only home, we have ever known.

Fusion blows the competition away.  The energy released is - by far - the most mankind has ever encountered.  It should make you think differently about our energy options.  If abused, it could destroy our planet [6, 7].  A good illustration of this, is what one thousand megawatts looks like, in different forms [A, B, C, D, E, F].  This is shown below. 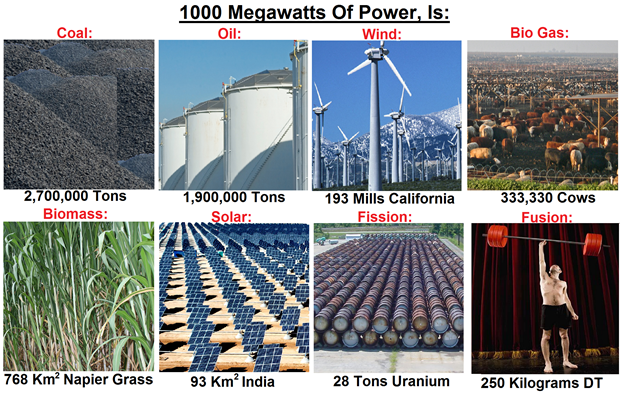 On March fourth, Jamie Edwards became the youngest person in the world to fuse the atom.  He is an 8th grader in Lincolnshire, England.  He did this with three thousand pounds, and a principals’ blessing.  His fusor works the same way a polywell does.  This was news.  Over fifty articles reposted the news across the web [4].  Jamie got a letter of congratulations from His Royal Highness, Prince Andrew, the Duke of York [5].   He also got an appearance on the Letterman show [20].  There was even a political cartoon in the daily mirror. 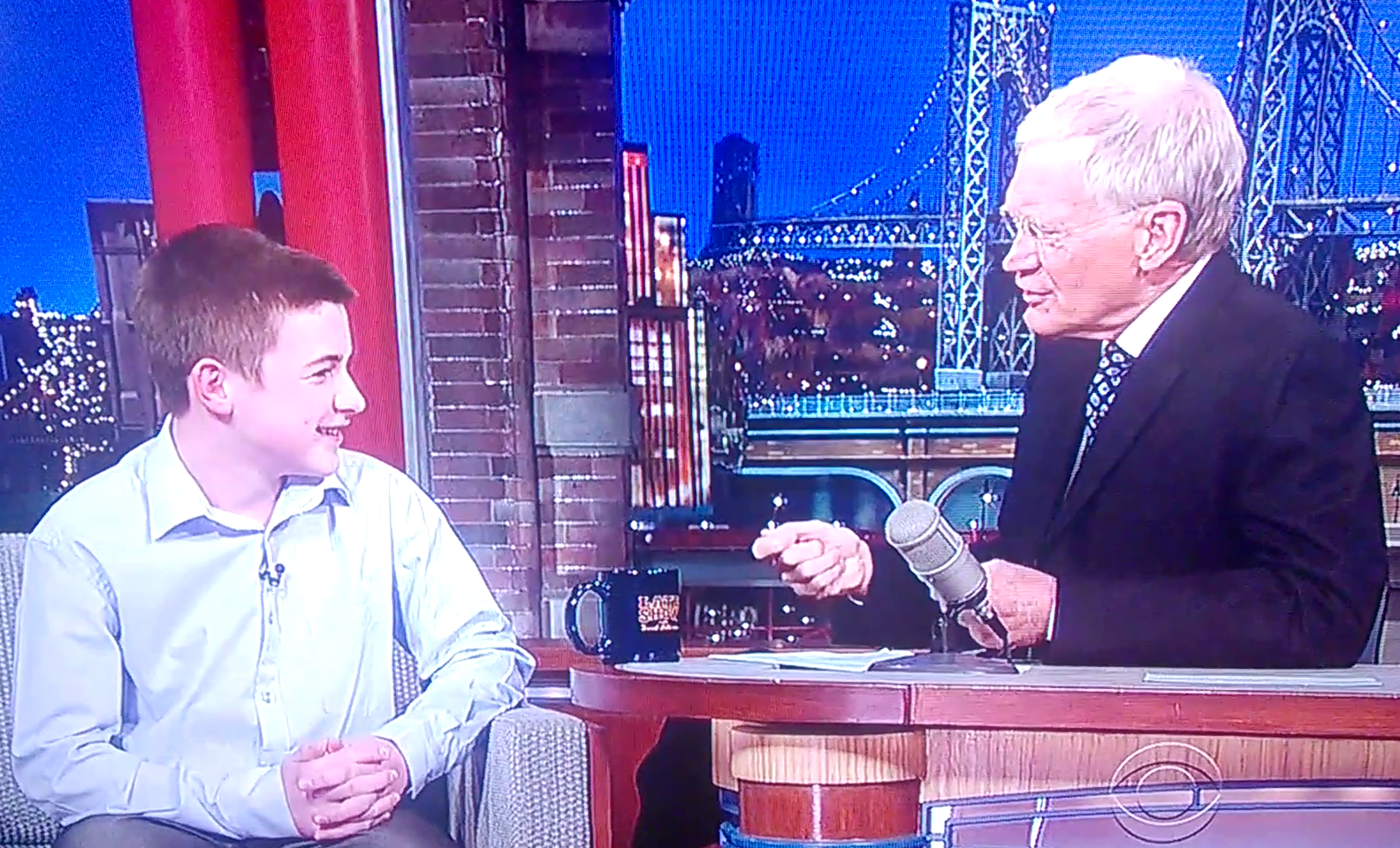 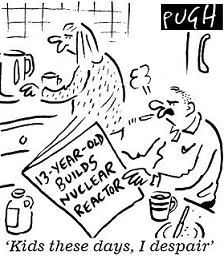 It is impossible to predict the future.  People have been promising grand things from fusion, for decades.  But this is not 1980 – it is 2014.  Today, we are closer to fusion power than we have ever been.  Today we are more strapped energy, more limited for resources and support more humans than ever before.  Powerful forces are at work.  They are reshaping civilization.  Energy and climates’ sway worldwide is gradually swelling.  The trajectory is clear.  Every nation is going to be looking for energy.  If they have not yet, they will be soon.  Fusion is the most plentiful source known to mankind.  IEC has recently broken away, as a simple, ultra-cheap path to fusion.  The conditions are ripe: interest in this is going to explode - and it cannot happen soon enough.
1000 MW Citations: